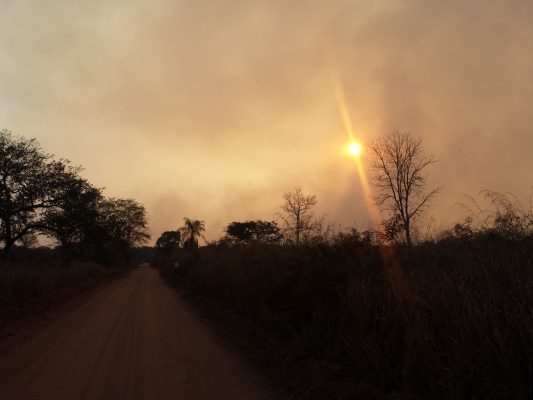 It has been yet another unusual (read “warm, extreme weather fluctuation”) winter in New York City. More than once this year we had both winter weather (snow storm, below freezing temperatures) AND 70 degree days in one single week. Just this past Wednesday New York hit a whooping 70F degrees. Today, 2 days later, New Yorkers shivered in 30F high temperature. Early February smashed the 52 year mark for warmest temperature on record with 65 F on February 7th. Early the next day, temperatures plummeted to 30F. Luckily for us New Yorkers the most annoying thing this winter was to keep at hand both warm and cold weather clothes. And fight a few nasty colds that went around the offices.

We were not the only ones experiencing strange weather. Far away in Brazil, in the middle of Mato Grosso state, the indigenous peoples that populate Xingu Indigenous Park experienced unusual weather as well. Rains did not arrive in October as they have been for hundreds of years. There was some rain in January and then heavy rain in February. What did this meant for them? A few months with almost no food. Hunger. Their main crop, manioc, is usually planted in September. Because rain did not arrive during it usual schedule, the first planted manioc crop died. The communities replanted a new crop (note that they save only a certain number of manioc stems for planting). The second crop died as well: it did not rain. Third time was a charm this year: after the third crop was planted, the long awaited rains finally arrived in January and it looks like the third crop will make it. Three months later than normal. Still the rain pattern was strange, with scattered showers alternating with several hot sunny days, unusual for this time of the year.

The indigenous people of Xingu were not as lucky as New Yorkers. The climatic variability they experienced affected their food supplies. They went hungry for weeks and months. New Yorkers just kept switching from flip flops to down jackets in a matter of days.

The weather forecast for both places: beyond normal. Yes, we might have seen less snow in NYC because of La Niña, but still… a drop of 40 F in 2 days?

In Xingu, years of deforestation replaced cool moisture-producing forests with hot, dry pastures for cattle and massive soy fields. This has caused permanent changes the regional weather: less rain during the rainy season and increased heat during the dry season. In 2016, a scorching July gave birth to wild fires that burnt for weeks and wracked havoc in the already shrinking Xingu forests. Once rainy summers (I witnessed a 5-day period of almost continuous rain just 3 years ago in December) turned dry.

Our comfortable lives in New York City may not be drastically disrupted for now. We just need to have winter and spring clothes next to each other in our closets, get frustrated about it and vent on Facebook about the crazy weather swings our city has. In Xingu however, people are concerned about their lives. What will happen to their existence if they cannot grow manioc, what will they eat? With no rain and low river levels, not even fish can breed properly. Manioc and fish make 90% of their diet.

The communities of the indigenous park started thinking seriously how to become more resilient to all these climatic changes. 2017 is not the first year that their crops died; 2016 was similar, with one crop failing, not two like this year. Similar to New Yorkers, they are also thinking that maybe this is the new normal. They now meet in the center of their villages to find solutions that will ensure their food security: from irrigation methods (but with what funds?) to moving the crops location to changing the planting season. They are scrambling to find the most appropriate solutions. There is not enough past experience to provide advice on how to deal with this kind of problem. The elders have never faced similar weather shifts in their lifetime. They can only draw on past experiences when they used to move their manioc gardens when the soil became too depleted of nutrients to bear crops. This option is on the table. In fact, one village decided to split in two and form a smaller village further away, to alleviate the pressure the 300 strong population puts on the surrounding crop soil (see blog entry).

These changes are not going anywhere. These anomalies are becoming the new normal. All humans need to adapt, ones faster than others. Communities, from New York to Xingu have to become resilient and adapt to extreme weather, a consequence of climate change.

The “Building Climate Change Resilient Communities” class offered by Village Earth in April offers insights on what climate change resilience is and how to adapt to this new climatic reality.